Just how many guns do Americans privately own? It’s virtually impossible to say

(NationalSentinel) There are estimated to beÂ 393 million civilian-owned firearms in the United States.

The U.S. Military is estimated to have 4.5 million small arms, while U.S. law enforcement firearms are estimated at around 1 million.

In the United States civilians are not required to register firearms, with the exception of NFA regulated items (like fully automatic weapons and short-barreled rifles). This means it is not just difficult, butÂ impossible to get exact figures for civilian firearm ownership in the U.S.

“Gun ownership is one of the hardest things for researchers to pin down.” -Â Drew Desilver, Pew Research

In recent years, the most cited source for a civilian gun ownership estimate in the United States is aÂ Small Arms Survey global report. The report used survey data, other data, and “expert estimates” to make their own estimates for the end of 2017.

The report estimates that there are 393,300,000 civilian-held firearms in the United States, including both legal and illicit firearms. The rate of firearms per 100 residents was estimated to be 120.5. In other words, they believe there to be more firearms than people in the United States.

The 393,300,000 figure represents a substantial increase fromÂ Small Arms Survey’s 2007 report, which estimated at the time there were 270,000,000 civilian-owned firearms in the United States. Some sources indicate that Small Arms Survey’s estimate could be high. The most noteworthy example is aÂ survey by Harvard and NortheasternÂ which estimated American civilians own 265 million guns in 2015.

A 2012 report by theÂ Congressional Research ServiceÂ estimated there to be 310 million civilian firearms in the United States in 2009. This estimate seems more in line with Small Arms Survey’s findings, considering other indicators on how many firearms were purchased between the publishing of the two reports.

According to the 2017 Small Arms Survey report: 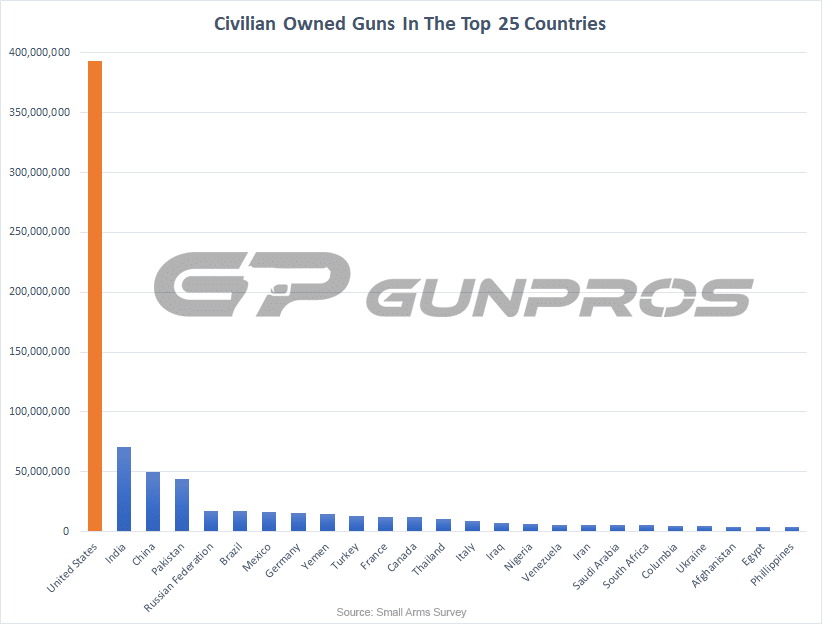 The number of firearms per civilian in the United States is also astounding. The chart below shows the civilian firearms per 100 residents in the top 25 countries (excluding countries with a population below 150,000). Difficulties in Estimating Civilian Gun Ownership in the United States

As mentioned at the onset of this article, Americans are not required to register their firearms. This makes it impossible to know how many legal guns civilians own in the United States, let alone how many illegally owned firearms there are.

Estimates of legal gun ownership rely heavily on survey data, but it’s commonly suspected that some percentage of civilians under-report and hide their gun ownership.

It’s also impossible to know the number of guns that are lost, damaged beyond repair, or otherwise removed from the ownership of civilians.

“Just how many guns do Americans privately own? Itâ€™s virtually impossible to say.”
Enough for us Conservatives to win ANY Civil War, guaranteed !

After watching Democrat debate, Americans should buy more. The Democrats, Progressives, Liberals, socialists and Communists are planning to take our country away from us…