Are America and the West headed toward collapse? New study finds startling similarities to fall of past civilizations

Predictions of America’s doom and gloom ahead are nothing new, as it’s always easier for us to see the glass as half-empty rather than half-full. So it’s not surprising that a new study has made a similar ‘prediction.’

But unlike many past analyses, a new look at an old study by historian Arnold Toynbee in his 12-volume magnum opus “A Study of History” examined his findings and identified key elements within each past great civilization that explained why they collapsed.

In short, past great civilizations like the Roman Empire didn’t “die” so much as they ‘committed suicide, theÂ BBC reports.

Toynbee “was right in some respects: Civilizations are often responsible for their own decline. However, their self-destruction is usually assisted,” wrote theÂ BBC‘s Luke Kemp.

The Romans, for example, decayed from within but Rome was eventually sacked by the Visigoths in 410 and the Vandals in 455.

“Our deep past is marked by recurring failure,” Kemp writes. “As part of my research at the Centre for the Study of Existential Risk at the University of Cambridge, I am attempting to find out why collapse occurs through a historical autopsy. What can the rise and fall of historic civilizations tell us about our own? What are the forces that precipitate or delay a collapse? And do we see similar patterns today?”

Kemp developed a graphic charting the rise and fall of many great Western civilizations: 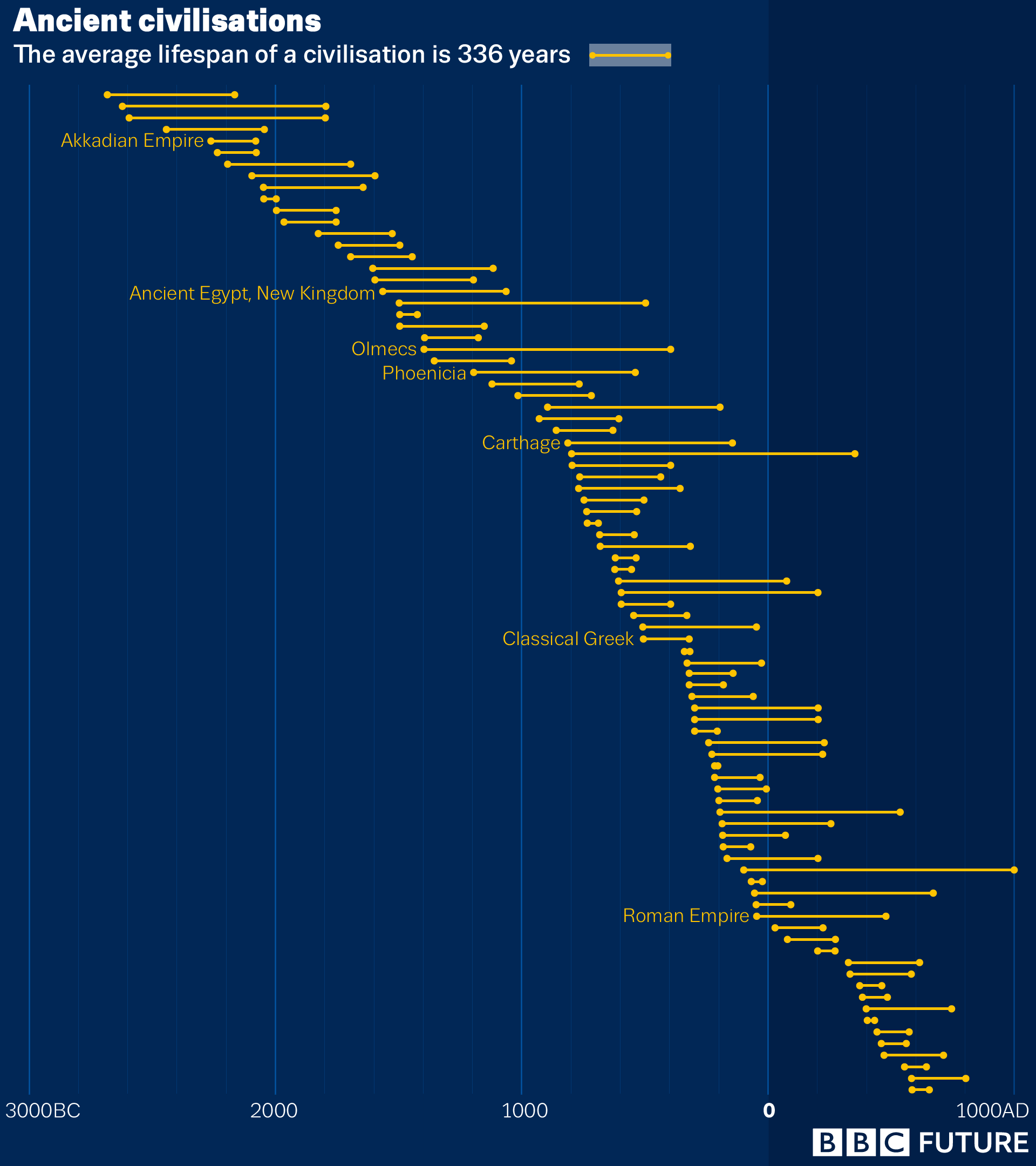 He notes further that gauging ‘collapse’ is not always cut and dried:

Collapse can be defined as a rapid and enduring loss of population, identity and socio-economic complexity. Public services crumble and disorder ensues as government loses control of its monopoly on violence.

Virtually all past civilizations have faced this fate. Some recovered or transformed, such as the Chinese and Egyptian. Other collapses were permanent, as was the case of Easter Island. Sometimes the cities at the epicenter of collapse are revived, as was the case with Rome. In other cases, such as the Mayan ruins, they are left abandoned as a mausoleum for future tourists.Â

What’s more, thanks to the spread of globalism, because the world’s economic system is now so intertwined, collapse would no doubt spread more quickly and affect more civilizations.

He argues that several factors including widespread political inequality (that is, a government that becomes so unresponsive to the people it no longer functions or holds moral authority) can hasten the collapse.

Another non-corollary study by NASA’s Goddard Space Flight Center was less than optimistic about the future of humankind in general.

Led by mathematician Safa Motesharrei, it questioned the sustainability of modern civilization.

The study noted: â€The fall of the Roman Empire, and the equally (if not more) advanced Han, Mauryan, and Gupta Empires, as well as so many advanced Mesopotamian Empires, are all testimony to the fact that advanced, sophisticated, complex, and creative civilizations can be both fragile and impermanent.”

Scarcity of resources such as water, agriculture, and energy were found to lead to decline.

When coupled with an unsustainable population or unfavorable climate change, it can spell disaster.

Researchers noted that a huge divide in the rich and poor played “a central role in the character or in the process of the collapse” of civilizations over “the last five thousand years.”

In the U.S., our mounting national debt — now more than $22 trillion (total debt is more than $72 trillion)Â — coupled with political and systematic failure, along with the exploitation of our divisions are all seen as endangering our longevity.

Study after study has shown that current entitlement programs are unsustainable and are on a path to insolvency, yet politically, it’s impossible to reform them. And while Americans supported the GOP tax reform bill passed in December 2017, the problem is there has been no slowdown in spending, so the trajectory for entitlement programs to continue going bankrupt has been sustained.

And there is little appetite in D.C. to reform the programs that are sucking our economy dry.

Been preaching about this historic comparison for over 50 years, ever since taking ancient history courses at University of Texas in the early 1950’s. History tends to repeat itself.
.

The Scriptures have also informed us as to why societies collapse.

I’m old and expirieced the best times imo the 60′ 70’s 80’s and the present thanks to Trump …If Dems get WH it’s over.I’ll just sell house,stock up and move to my cabin…

What nattering nabobs of negativity. We are headed toward the glorious people’s collective utopia where all comrades will be equal.
Everything will be free and no one will be restrained by joblock anymore because we will be too busy petting magic unicorns that power the utopia.

Ridiculous, and I am so tired of hearing it. The ROMAN EMPIRE NEVER Collapsed, it NEVER Ended. WE are the Romans! Look, the BS of Alaric the Goth sacking Rome in 410ad is true, but he was there fro two days as a Roman army sped towards him. They were caught flat footed. In 455 AD the Vandols invaded from North Africa because the Emporer had been assassinated and his daughter had been promised in marriage to the King of the Vandols, BUT another treachorous Roman declared himself emporer and married the duaghter to his son. The vandols killed both… Read more »