As a means of upgrading its capabilities in the face of advanced threats posed by near-peer competitor nations, the U.S. Navy has agreed to purchase a small fleet of autonomous submarines it will utilize as a “robot wolfpack” of sorts to interdict enemy vessels and undersea threats. 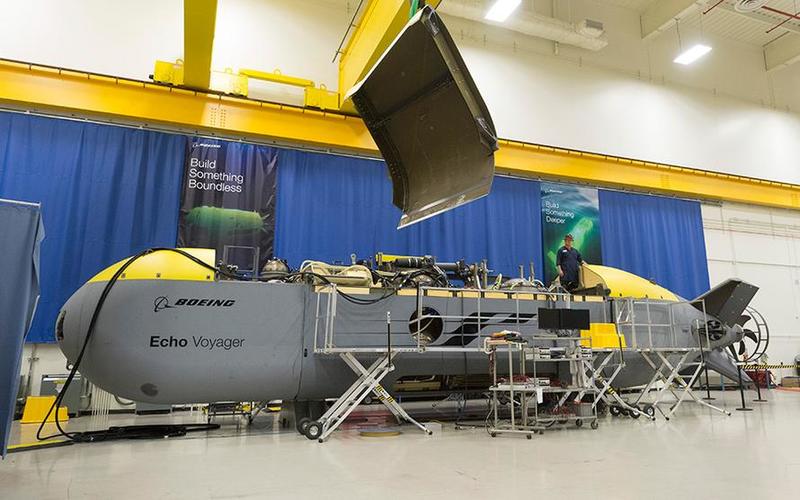 Boeing based its winning Orca XLUUV design on its Echo Voyager unmanned diesel-electric submersible. The 51-foot-long submersible is launched from a pier and can operate autonomously while sailing up to 6,500 nautical miles without being connected to a manned mother ship, according to the Navy. Eventually, the Navy could also use the Orca XLUUV for mine countermeasures, anti-submarine warfare, anti-surface warfare, electronic warfare and strike missions, according to a Navy outline of the systemâ€™s capability development.

â€œWe are pleased with the Navyâ€™s decision to award Boeing a contract to build and deliver four Orca Extra Large Unmanned Undersea Vehicles, and are committed to providing this important autonomous undersea capability to meet the Navyâ€™s unique mission needs,â€ the company said in a Thursday statement to USNI News.

Meanwhile, the Navy is also looking at the possible use of Large Diameter Unmanned Underwater Vehicles (LDUUVs) as another rapid acquisition program.

The LDUUV would be a vehicle-launched from either a Virginia-class fast attack submarine or from a surface ship, the Navy said. LDUUVs could perform similar missions as the XLUUV, however, the LDUUV would need to remain relatively close to the mother ship instead of operating autonomously like the XLUUV.

AsÂ Popular Mechanics notes further, the Orcas will be quite capable:

The sub features an inertial navigation system, depth sensors, and can surface to get a fix on its position via GPS. It uses satellite communications to â€œphone homeâ€ and report information or receive new orders. Echo Voyager can dive to a maximum depth of 11,000 feet and has a top speed of eight knots.

One crucial piece of Echo Voyager is the modular payload system that allows it to take on different payloads to support different missions. The unmanned sub has an internal cargo volume of 2,000 cubic feet with a maximum length of 34 feet and a capacity of eight tons. It can also support external payloads hanging off the hull.

Orca could even pack aÂ Mk. 46 lightweight torpedoÂ to take a shot at an enemy sub itself. It could also carry heavierÂ Mk. 48 heavyweight torpedoesÂ to attack surface ships, or even conceivably anti-ship missiles. Orca could drop off cargos on the seabed, detect, or even lay mines. The modular hardware payload system and open architecture software ensures Orca could be rapidly configured based on need.

Navy and defense industry officials are extremely enthused about the program cost of the vessel. At just $43 million for four robot subs, which could be deployed in “packs” to decimate enemy ships, the sea service’s next ‘cheapest’ warship with similar mission capabilities is the Littoral Combat Ship.

“The nearest rough equivalent is the Navyâ€™s Littoral Combat Ship, whichÂ costs $584 million eachÂ and has a crew of 40. While LCS is faster, has the benefit of an onboard crew, and carries a larger payload, Orca is autonomousâ€”and cheaper by orders of magnitude,”Â Popular Mechanics reports.

The vessels can also be considered disposable assets when serving as decoys for U.S. attack boats lying in wait for enemy subs to take a shot at them.

“Orca may or may not be a system that becomes a full-fledged member of the fleet, although the Navyâ€™s purchase of four of the drones indicates it does plan on using them for real-world missions. The Navy is probably purchasing enough to continue testing while having a few on hand for actual use,” Pop Mechanics noted.

Last month, the Navy’s autonomous Sea Hunter ship conducted its first surveillance mission from San Diego to Pearl Harbor, Hawaii, and back without a crew onboard.

Beware the multi mission weapons system which too often translates in an actual shooting war into usable for many roles but a first class target specific enemy killer in none.

Why are these unmanned underwater vehicles not powered by unicorn farts? Esteemed party member Comrade Kommissarina AOC will not be happy with these capitalist pig imperialist inventions.
They were probably created by some white male deplorable who was using his white privilege to squash superior designs created by a person of politically preferred pigmentation.