A Chinese navy vessel sporting what appears to be a high-tech next-generation armament set sail earlier this week causing speculation that the weapon will be undergoing sea trials.

The weapon is called a “railgun,” and it is designed to fire projectiles at hypersonic speeds over distances that exceed 100 miles. But the gun doesn’t use traditional shells and gunpowder, it uses electricity to launch projectiles down a rail with enough velocity to destroy targets including other warships.

Pictures of the Chinese warship sporting a railgun were initially posted online earlier this year.

So far, the clearest photo of the railgun. pic.twitter.com/owrdV0JpCt

New photos of the ship, Haiyang Shan, heading out to sea were posted online this week. That said, the photos were released on China’s tightly-controlled social media networks, which means the communist governmentÂ allowed them to be leaked. 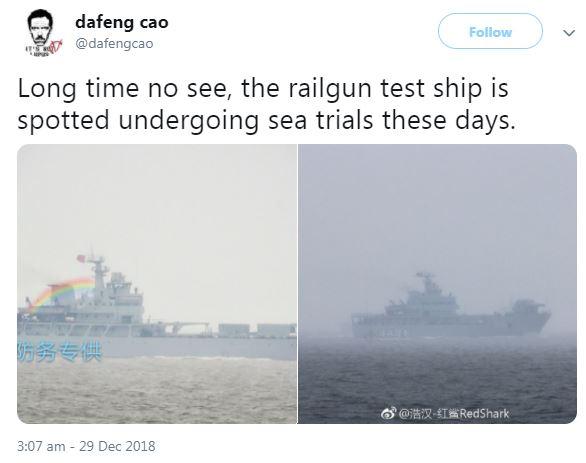 As for the Chinese railgun’s range, The Sun claimed that U.S. reports say that it has a 125-mile range.

According toÂ the paper’s online version,Â it’s supposed to be a new “superweapon” for which there is no defense:

The images suggest Beijing has beaten the United States and Russia to getting the next generation weapon into operational testing.

So, are the Chinese light years ahead on a design the United States has been working on and testing since before 2008?

Sure, but there are a number of reasons to suggest that most of what we’re seeing regarding China’s railgun is hype.

First of all, railguns require an incredible amount of power, and the current generation of U.S. warships, advanced though they are (and more advanced than Chinese counterparts) do not generate the kind of power needed to fire railguns.

TheÂ Office of Naval Research began an Innovative Naval PrototypeÂ program for electromagnetic railgun technology in 2005, and in 2012 ONR began a second phase that focused on getting the railgun ready for operational use â€“ specifically, demonstrating a 10-shots-per-minute firing rate. Though the INP spans until 2020, it covers only the science and technology development portion of the program and cannot conduct the shipboard integration piece â€“ engineering a gun mount that connects to the ship and its combat system; engineering a battery or other power system to support the railgun if the ship cannot supply sufficient power on its own; and marinizing the system to withstand the saltwater, sand, wind and other conditions at sea.

The U.S. Navy’s next-gen destroyers are trending towards a modular design; that is, a sort of ‘plug-and-play’ model in which weapons, radar systems, and other ship components can be added later when development and testing are complete. So while current warships don’t have the power to operate railguns (which have not yet been completely developed and tested anyway), next-gen ships will.

But there’s something else as well — laser weapons.

In fact, Navy research and development officials say the sea service has had more success integrating lasers onboard warships than railgun technologies.

Rear Adm. Ron BoxallÂ told USNI News this week that â€œweâ€™ve made more progress putting lasers on ships than we have for putting a railgun [on a ship], because itâ€™s not just about the gun, itâ€™s about the power distribution and all those things. So those are exactly the things weâ€™re looking at.â€

As for the Navy’s railgun,Â ONR Electromagnetic Railgun program officer Tom Boucher said his office’s â€œgoal is to develop and test a prototype railgun barrel that can fire a projectile with 32 megajoules muzzle energy, that has long bore life and is capable of being fired at 10 rounds per minute.

â€œOur current generation of Railgun launchers has already achieved our objective size and 32 MJ launch energy,â€ and the bore life is already looking better than conventional guns and is set for even better performance in the future thanks to ongoing work with advanced materials, he added.

The last piece, the 10-rounds-a-minute rate, is still being worked on. It could not be achieved at the previous test facility because the launcher was not cooled, limiting it to just three shots in a row before it would need time to cool down. With a new test site stood up that has a thermal management system for the railgun, â€œwe expect to achieve 10 rounds per minute at 32 megajoules by the end of 2018.â€

With so much U.S. development still to go and no ship-mounted railgun currently in operation, it’s hard to believe the Chinese navy has achieved that milestone.

It took the Chinese 30 years to figure out how to make a ball point pen that did not leak after stealing the IP. The Chinese military is a Terracotta Army. If you are unfamiliar with the term, google it.

If the Chinese have this technology then so do we. Where else would they steal it from?

Blame it on the Klingon Clinton’s who gave China our classified.