(National Sentinel)Â Dangerous Hypocrisy:Â The â€œestablishmentâ€ media is doing its best to convince as many Americans as possible that the so-called â€˜bombsâ€™ sent this week to notable Democrats and critics of POTUS Donald Trump were the result of the presidentâ€™s â€˜violentâ€™ and â€˜hostile rhetoric.â€™

â€œGiven what Trump has done and said, this was absolutely predictable,â€ Paul Waldman wrote atÂ The Washington Post. â€œIn fact, itâ€™s a wonder that it took this long. Itâ€™s not just that Trump advocates violence against his political opponents â€” though he does. Itâ€™s that everything about his rhetoric pushes his supporters in that direction.â€

The unrelenting hatred churned up by Donald Trump for the two years following 2016 is dangerous. A Washington Post columnist is dead and progressive icons are targets of bombs. https://t.co/SFkRuAIlFx

â€œIf law enforcement wants to warn for future bomb targets, all they need to do is check Trumpâ€™s Twitter feed and play back tapes of his campaign rallies,â€™â€™Â tweeted activist and writerÂ Amy Siskind. 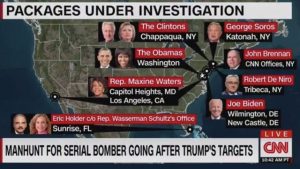 For instance, where was the widespread media condemnation when twice-failed presidential loser Hillary Clinton said recently that her side of the political aisle should not be â€œcivilâ€ to the other side of the aisle?

In an interview withÂ CNNÂ (who else?),Â Clinton stated plainlyÂ that it is not possible to be civil with a party (the GOP) â€œthat wants to destroy what you stand for, what you care about.â€ She noted further that if Democrats can win back one or both chambers of Congress, â€œthatâ€™s when civility can start again.â€

â€œYou cannot be civil with a political party that wants to destroy what you stand for, what you care about. Thatâ€™s why IÂ believe if we are fortunate enough to win back the House and/or the Senate, thatâ€™s when civility can start again. But until then, the only thing that the Republicans seem to recognize and respect is strength,â€ she said.

Of course, sheâ€™s not the only Left-wing Democrat to use this kind of rhetoric. Rep. Maxine Waters, D-Calif., has called on supporters to physically confront members of POTUS Trumpâ€™s Cabinet wherever they find them and to â€œpush back on them.â€

â€œLetâ€™s make sure we show up wherever we have to show up and if you see anybody from that Cabinet in a restaurant, in a department store, at a gasoline station,Â you get out and you create a crowd and you push back on them, and you tell them theyâ€™re not welcome anymore, anywhere!â€Â she said earlier this year.

If that isnâ€™t a dog whistle call for violence, then nothing is.

This all comes after a sitting member of Congress â€“ House Majority Whip Steve Scalise, R-La. â€“ was nearly assassinated by a hard-Left Bernie Sanders supporter in June 2017 as he and other GOP lawmakers were practicing for their annual congressional softball game.

ButÂ fake bombs being sent to DemocratsÂ just two weeks before the 2018 midterms designed to do nothing more than change the political narrative and tilt it in favor the Donkey Party â€“ well, thatâ€™s just too much!

POTUS Trump and Republicans have been targeted by unhinged Leftist mobs for nearly two years. For the Left-wing establishment media to feign outrage now over fake bombs and blame them on the presidentâ€™s allegedly â€˜violentâ€™ rhetoric is a sick joke.

Dimocrats have No Shame and of all Americans they should be most ashamed of themselves for how they are treating their fellow Americans, friends, neighbors and family. Republicans are largely Christian, good, fair minded people but very patriotic and will stand strong when push comes to shove. It seems to me that for the last 40 years Dimocrats have run over conservatives until it has gotten to the point where we have no choice left but to fight for what this country is all about. It’s amazing that the Dimocrats can’t understand that we are no longer buying their fake… Read more »