MORE evidence Obama funneled money into Iranâ€™s nuclear program, as Tehran prepares to RAMP IT UP

(National Sentinel)Â Treasonous:Â You may recall that as the Obama administration rolled out the news that it had negotiated a â€œdealâ€ with Iran to curb that countryâ€™s burgeoning nuclear program, reports surfaced that the White House had approved the payment of what can only be called aÂ ransomÂ to the terrorist-sponsoring regime.

No, it wasnâ€™t a â€œransomâ€ paid to convince Iran to release four Americans it was holding hostage. But, strangely enough, the first installment of some $1.7Â billionÂ Obama eventually paid the Iranians arrived inÂ cash,Â stacked on pallets in the back of a cargo planeÂ that was delivered in the middle of the night.

The administration said the money was to settle a 40-year-old debt over a failed arms deal that went south after theÂ fall of Shah Mohammad Reza Pahlavi in 1979.Â

Whatever the case, then-Secretary of State John Kerry later admitted â€œsomeâ€ of the moneyÂ would go to fund Iranâ€™s terrorist activities.Â

But some would also go to fund the nuclear program the IraniansÂ are still secretly building.

Having helped Iran keep its nuclear program funded, the Obama â€œdealâ€ and resulting financing through direct payments and sanctions relief made it possible for officials in Tehran â€” including Supreme Leader Ayatollah Khamenei â€” to declare their intention of beginning the enrichment of uranium once again (if they ever really stopped).

As noted byÂ The Daily Wire, Iran informed the Atomic Energy Agency on Tuesday that it will begin to increase enrichment capacity:

Ali Akbar Salehi, vice president and head of the Iranian Atomic Energy Organization, stated that a letter had been given to the IAEA about the increase, and stated bluntly, â€œIf conditions allow, maybe tomorrow night at Natanz, we can announce the opening of the center for production of new centrifugesâ€ for uranium enrichment, adding, â€œWhat we are doing does not violate the (2015 nuclear) agreement.â€

Last month, President Donald Trump announced he was pulling out of the Iran deal â€”Â which he claimed was â€œterribleâ€ during his 2016 campaignÂ â€” because after giving the Europeans and Iran more than a year to fix problems he saw as detrimental to the United States, they failed to get them addressed.

European countries have vowed to continue â€˜honoringâ€™ the original deal even as they continue their dialogue with Tehran, seemingly undercutting the U.S. â€” the country that continues to keep NATO afloat and a credible deterrent to a revisionist Russia. 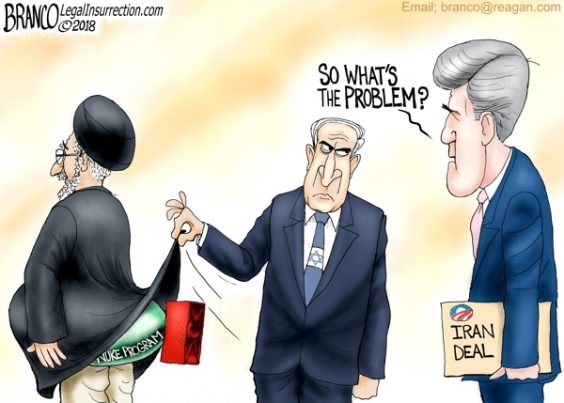 Prior to Salehiâ€™s comments,Â Khamenei said, â€œThe Atomic Energy Organization of Iran is duty-bound to prepare the ground for achieving 190 thousand SWUs.â€ He further noted that plans would be â€œwithin the framework of the JCPOA [the nuclear deal] for the time being.â€Â

Mind you, Khamenei said last month that the original nuclear deal would remain in effect only if European signatories rolled over and permitted Tehran, without question, to continue its ballistic missile development and its support for various terrorist and militant proxies in the region, including Hamas and Hezbollah.

â€œIf the Iranians donâ€™t surrender now, and try to returnâ€ to un-monitored uranium enrichment, â€œthere should be a clear statement by the President of the United States and all of the Western coalitionâ€ that â€œif the Iranians returnâ€ to uranium enrichment that eventually gives them enough fuel for a nuclear bomb, â€œa military coalition will be formed against them,â€Â Israelâ€™s intelligence chief, Israel Katz, said.

No wonder the Israelis didnâ€™t think much of Obama.