(National Sentinel)Â Propaganda: Politico Dick Morris is advising Republican voters not to be dejected by mainstream media reporting that a ‘blue wave’ is coming in the November midterm elections, especially in the Senate.

In fact, he says, a major new survey suggests that Democrats are in trouble, not Republican incumbents.

While the national media is rife with speculation that the 2018 midterm elections will be bad news for President Donald Trump, a poll of 250,000 registered voters released byÂ Morning ConsultÂ indicates otherwise.

In state after state, a plurality of voters say that the Democrat incumbent senator does not deserve re-election and in half the states, the generic party ballot points to a Republican victory.

Since the Democrats have 26 states at risk (with Democrat or Democrat-leaning â€œindependentâ€ incumbents), while the GOP has only nine, this trend is very bad for Democrats.

In a number of swing states, when voters were asked if the incumbent Democratic senator deserves re-election, most resoundingly responded “no.”

That includes Sen. Claire McCaskill of Missouri, Sen. Bill Nelson of Florida, and Sen. Joe Donnelly of Indiana. While Sen. Dean Heller of Nevada, a Republican, is underwater, so too are Democrats in North Dakota, Ohio, West Virginia and Wisconsin. 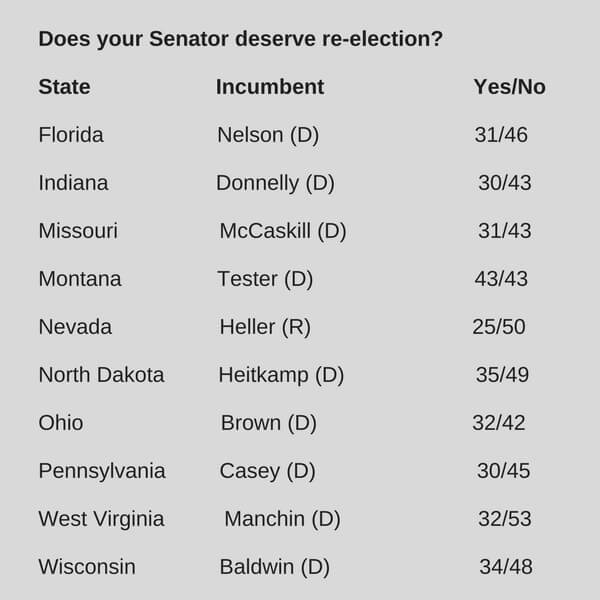 “This will give Republicans something they have not had all year: a working majority,” Morris wrote, blaming the wide gap between these figures and what’s being reported by the press as “media bias” of the kind that got the 2016 election outcomes all wrong.

He also noted that Trump’s approval rating has gone up in recent months as well, despite the nakedly negative attacks on him by the media and the Deep State.

I personally have felt that with all the negativity the dems spew forth 24/7 and all the good the republican party has done in such a short time, that the dems really don’t stand a chance of gaining anything in Nov. and quite possibly, could end up LOOSING seats, both in the House of Rep. and the Senate. And with all their bravado claiming a blue wave in the elections, this will only help drive more and more Republicans to the polls to make sure that doesn’t happen. It amazes me that the dems talks about Impeaching the President if… Read more »

The numbers have always favored the republicans picking up more seats in the senate since 3 times as many democrats are up in November. A working majority is possible, but it will not lead to an effective majority. McConnell blocks Trump agenda items. He passed a left wing budget which delighted the democrats. He has committees going after Trump, not looking at the actual corruption in DC. There are about 11 republican anti-Trump senators.

The House is being thrown by Ryan.