Lawyers sue California because too many kids CAN’T READ

(National Sentinel)Â School Daze: A group of prominent lawyers is filing suit against California on behalf of teachers and students from poorly-performing schools because they say the state has failed to teach a large number of school kids how to read.

According toÂ The Associated Press, the suit was filed by an advocacy law firm, Public Counsel, in Los Angeles Superior Court. It demands that the California Department of Education deal with what it says is a “literacy crisis.”

The suit further states that education officials have not followed recommendations from their own report regarding the problem that was issued five years ago.

“When it comes to literacy and the delivery of basic education, California is dragging down the nation,” said Public Counsel lawyer Mark Rosenbaum, who sued along with the law firm Morrison & Foerster.

The suit claims that less than half of California primary education students from third grade to fifth grade were able to meet statewide literacy standards since 2015 on English assessments, according to Rosenbaum.

Of the 26 worst-performing school districts in the country, 11 of them are in California, the suit says. Texas, which is the country’s biggest state, population-wise, after California, has only one district among the 26.

The suit claims that students have a constitutional “right to read,” according toÂ Education Week.

“The state has long been aware of the urgency and the depth of the all-too-preventable literacy crisis, and yet it has not implemented a single targeted literacy program to remedy this crisis,” said Rosenbaum, reportedÂ Newsweek. “The state system of public education in California is the great unequalizer. …Â Calfornia is dragging down the nation when it comes to literacy and the delivery of basic education.”

Plaintiffs include current and former teachers and students from three of the state’s lowest-performing districts: La Salle Avenue Elementary School in L.A.; Children of Promise Preparatory Academy, a charter school in the Los Angeles suburb of Inglewood; and Van Buren Elementary School in Stockton.

“An education that does not provide access to literacy cannot be called an education at all. Nor can it prepare students to be citizens, participate meaningfully in politics, exercise free and robust speech, and voice the views of their communities,” says the complaint.

TheÂ Los Angeles Times noted that California’s superintendent and board of education president issued a report five years ago suggesting ways to boost the state’s literacy rate. The suit says that none of those recommendations wereÂ implemented.

The paper said that California lags behind the national average in both reading and writing.

Other low-performing states and jurisdictions include Mississippi, Alabama, Nevada, Arkansas, Louisiana, South Carolina, Michigan and Washington, D.C., according to a graphic from the U.S. Department of Education. 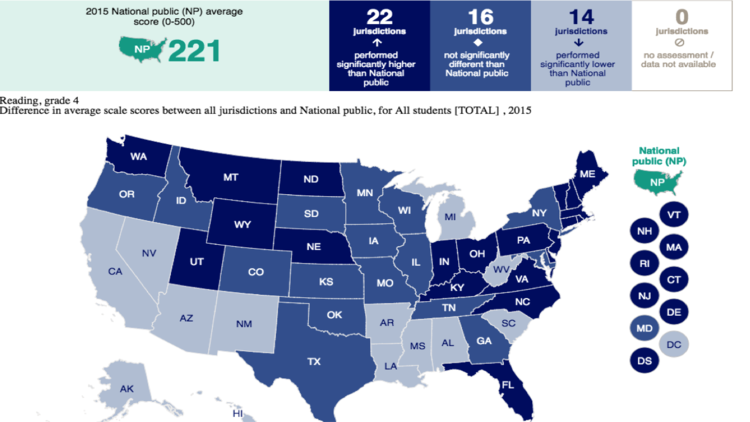 PlaintiffÂ David Moch, a retired teacher, said there were times he had to use Kindergarten tools in order to help kids as high as third and fifth grade.

Added Rosenbaum: “Thereâ€™s no accountability system in place to ensure that literacy is being delivered.â€

It would be ,I imagine, far more beneficial ,to not just Californians,but the global community if. rather than sucking taxpayers monies into private purses,they instead pursued their philanthropies by engaging in seeking yo collect damages, on behalf of the illiterate ,by suing the Moral Authority for the Reigning rule by lawyers

It’s all committed by acts implemented especially by the Moral Authority of the rule of law in the first place It is that morality.

God bless Andrew Carnegie, the wealthy man who contributed so much to our public library system. Growing up, I spent two hours every day after school in the library, because my mother was a librarian. What can you not learn by checking out and reading books from the library? Unfortunately, the libraries these days are being turned into computer stations and entertainment centers, or double as safe spaces for the growing number of homeless. And the good books in my city library are being taken out and not returned by the local leftists. I wonder Why?